This week, my project concentrates on the decoration of the codex. We've been looking at illumination techniques, ornamentation of scripts and initials, margin decoration, and so much more that I'm still trying to take it all in.

It's back to my empty quires - and time to copy some text, plan some decoration and then, hopefully, have a bit of fun with all these wonderful ideas!

A historiated initial is a larger, decorated initial that begins a section of text, and contains figures relating to the text. It signifies the importance of the text it belongs to.

Here's an example in the Glossed Epistles of Saint Paul, written in Latin in the 13th-14th century. The letter M begins the Book of Hebrews, and shows an executioner raising his sword about to strike Paul:

The larger text that runs down the left-hand side of the two columns is used for the main text from the Book of Hebrews; the gloss - that is, the  commentary - is written in smaller letters, and fills the rest of the columns.

The gloss also begins with a decorated M, but it's a smaller letter, a parti-coloured initial of blue and red, also being pen flourished inside and around the initial, a delicate, intricate pattern that drops below the initial here, to separate the text of the epistle from the gloss.

A super example of a full-page page initial can be found in this Psalter produced in Germany from the 11th century. The text is in Latin:

What a delight to study this magnificent page from a 15th century manuscript of John Lydgate's Siege of Troy, written in Middle English, in Anglicana Formata script.

Both columns of text are completely surrounded by decoration, with floriated bars around most of the text and the illustration filling the rest of the space:

The page below comes from a Book of Hours - Livre d’Heures à l’usage de Paris -  in the second half of the 15th century.

It displays a couple of my favourite decorative elements: rinceaux, or foliage, and line endings - bars of red, blue and gold that fill the empty space at the end of some lines of text, the colours reflecting those of the decorated initials.

Notice how the title of the next piece of text, written in red, is followed by a larger decorated initial to signal the start of a new section: 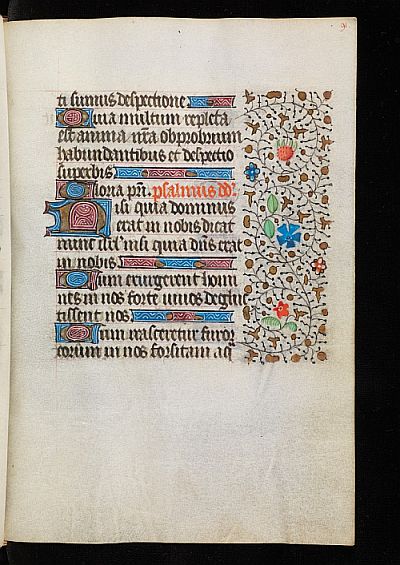 At the beginning of Gregory's Dialogues, from around 1100 in Latin, there is a portrait of the author within what I believe to be the letter Q, (Quadam die nimis) followed by display script in black and red, the whole surrounded by a floriated border.

I was glad to find  a relatively simple illustration as an author portrait, as this is the kind of portrait I wish to use :)

Pope Gregory is shown holding a book of the gospels, and a dove - the Holy Spirit - sits on his shoulder: 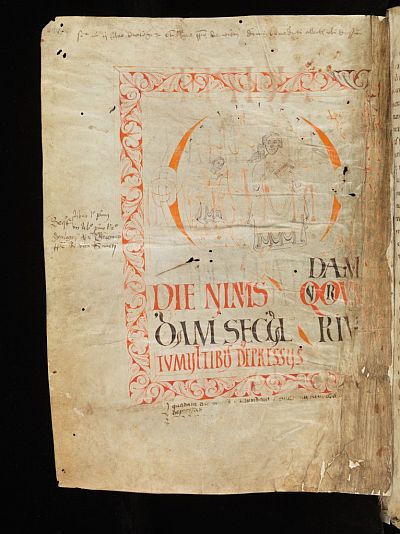 I'll be trying to pack in quite a few elements within comparatively few pages - so the design may not be typical of most medieval manuscripts, but we should have fun along the way!

To plan my decoration, I made a "test" quire and decided what I would put on each page: 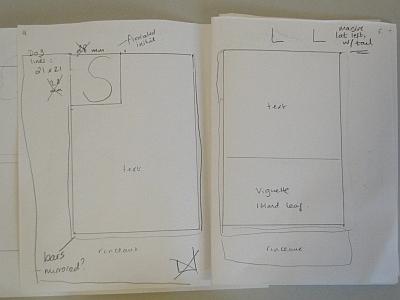 Page 1: display script - large, coloured letters with the title of the manuscript.

Pages 4 and 5: first poem, starting with a figured, floriated inital, lines continuing with smaller initials for each new line of the poem alternating red and green, so as to signify the hierarchy of initials.

Marginal decoration includes bars around text, probably lateral left with tail, and rinceaux along the outer and bottom margin of each page.

Recto page with vignette at the end of the poem. Each vignette refers to the poem that it corresponds to.

Pages 6 and 7: second poem, with another figured inital, floriate - a T shaped like a tree - and same smaller initials/illustration as first poem.

Pages 8 and 9: centre pages - painted double page with a diptych, that is, a panel on each page, each with a tree, each surrounded by a frame.

Pages 10 and 11: third poem, with a decorated initial to start the text section - flourished - and same smaller initials/illustration as first poem.

Pages 12 and 13: fourth poem, with a starting initial - I - in cadels, and same smaller initials/illustration as for first poem.

Page 15: Full page illustration of the mazer cup with frame.

First, I organised the mise-en-page of each page of the quire, ruled lines for text, leaving spaces for full-page elements and vignettes, as well as decorated initials at the beginning of each poem

Then I wrote the text, leaving guide notes for the rubrics - the red and green coloured initials that I'm using to show the start of poem lines - as well as notes for the the bars around the margins and the vignette: 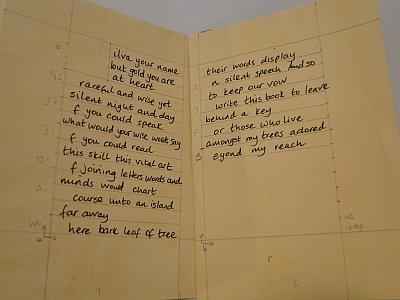 After that, I added the rubrics: 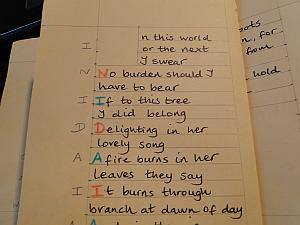 - and then worked on the initials for the start of each poem: 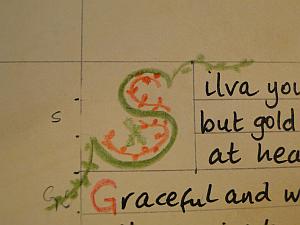 Next come the sketches for the illustrations: 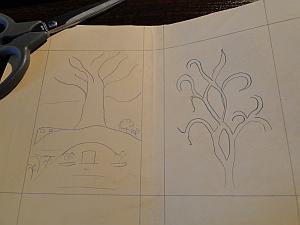 Before adding colours, I gilded (with a gold crayon) the full-page initial and some of the leaves on the tree above: 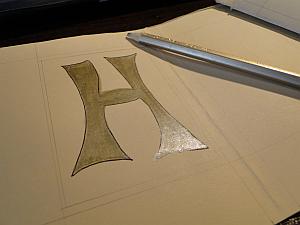 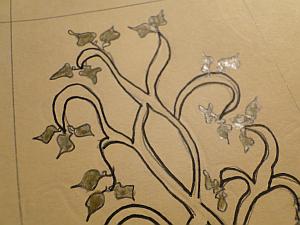 Here are the pages of the manuscript. 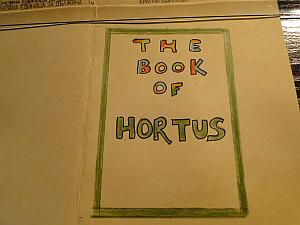 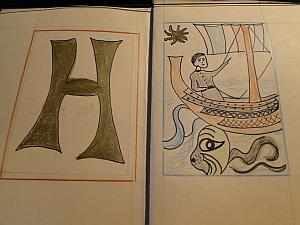 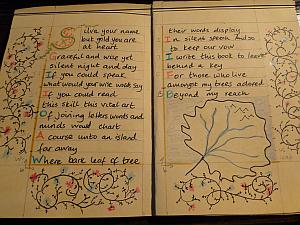 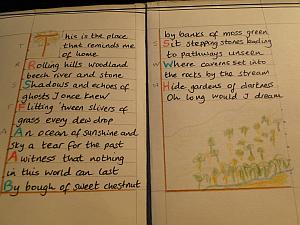 Two panels forming a diptych, each panel with a ruled frame: 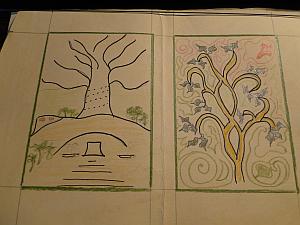 Flourished initial F; vignette of round tower described in poem: 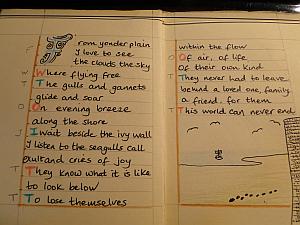 Initial I in cadels; vignette of maple leaf: 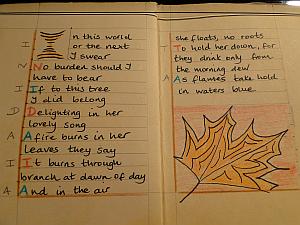 Historiated initial H with Hortus in his boat; full page illustration of the Mazer: 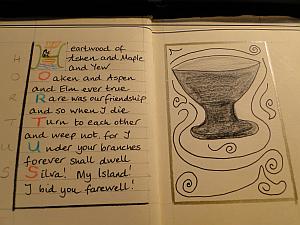 Thanks for reading! Next up: binding our quires :)